New York continues to suffer from an opioid crisis. As the opioid epidemic rages throughout the country, New York remains heavily burdened. There have been so many overdose deaths the past five years, that the medical examiners are overwhelmed. This has lead to a lag in accurate overdose data from previous years. For example, officials were unaware of the number of fatal overdoses in 2016 until the end of 2017. As a result, efforts to combat the epidemic were delayed. How bad is the New York opioid crisis? 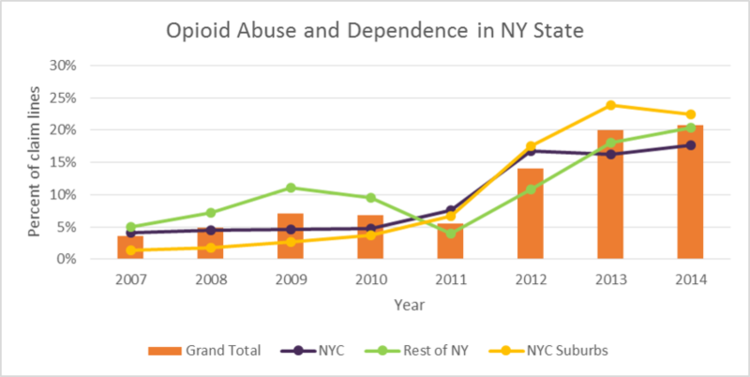 According to the police department, New York City lost 1,374 citizens to painkillers and heroin overdose death in 2016. Preliminary data shows there were at least 924 overdose deaths in 2017, but officials are still investigating.

Previously, insurance companies required prior authorization for inpatient treatment, which often halted patients from seeking immediate care. Currently, patients must receive coverage for two weeks of inpatient care before needing approval. Also, legislation ended prior authorization requirements on Medical Assisted Treatment, so Suboxone and Vivitrol can be administered without it.

Heroin isn’t hard to come by, especially in some regions of New York City. For instance, in the South Bronx, just a couple blocks from the local high schools, the abandoned railroad tracks are a popular place to shoot up heroin. Syringes lay scattered on the ground marking the area. South Bronx was known for heroin use in the 1960s, but due to the opioid epidemic, heroin ravages this area again.

The epidemic began in middle-class neighborhoods with Percocet and oxycodone use. Once prescriptions were denied and painkillers became harder to obtain, users switched to heroin. Heroin is much cheaper than pills, and the user receives a much stronger high with a smaller dose. However, tolerance to heroin can quickly increase, causing the need for larger and more frequent treatments. Once the demand became evident to drug dealers, the supply has been steady and abundant.

There are many outpatient addiction providers, 90-day inpatient rehabs, and emergency services for addiction-related issues in NYC. Except for the emergency services, none of these programs offer adequate medical care for opioid dependence. The vast majority of rehabs only address the addiction (psychological aspect) but not the dependence (medical issue). The lack of comprehensive medical care often leads to high relapse rates and more potential for overdose. Physical withdrawal is the most challenging stage to get through, so rehabs that don’t offer medical care are likely to have low success rates.

Alternatively, some programs provide Medical Assisted Treatment. Certified doctors prescribe opioid replacement drugs, like Suboxone, intending to taper patients off eventually. This and other similar buprenorphine-based medications are synthetic opioids that come with many of the same side effects and withdrawal symptoms as abused opioids. One of the primary differences with Suboxone is that the withdrawal syndrome is often harsher and lasts longer than with painkillers or heroin. As a result, the detox becomes even more difficult, even with proper medical detox support.

Many people want to quickly and safely detox from painkillers or heroin without committing to 90-days inpatient or replacing one drug for another. That is why New York residents have been flying to Southern California for the WAISMANN METHOD® of rapid opioid detox. For over 22 years, we have held the reputation as one of the leaders of rapid detox with the highest detox success rate in the country. Furthermore, our comprehensive assessment and physical screening followed by treatment in a full-service, accredited hospital ensure the highest safety standards.

The quadruple board-certified medical director is able to fully detox patients in a short amount of time without any pre-determined standards. In other words, every patient receives their own individual treatment plan based on their medical history, physical and mental conditions. Lastly, post-detox, staff transfer patients to our exclusively renowned recovery center, Domus Retreat. Clients spend a few days under the care of supportive staff with access to individual psychotherapy and holistic services to support the body and mind during the transition to living an opioid-free life.

We are proud to offer the most recognized and best rapid detox center in the USA for nearly 20 years. Call us today for individual drug treatment options.
1-800-423-2482
As Seen in The Media
Carousel Previous Logo Icon Carousel Next Logo Icon